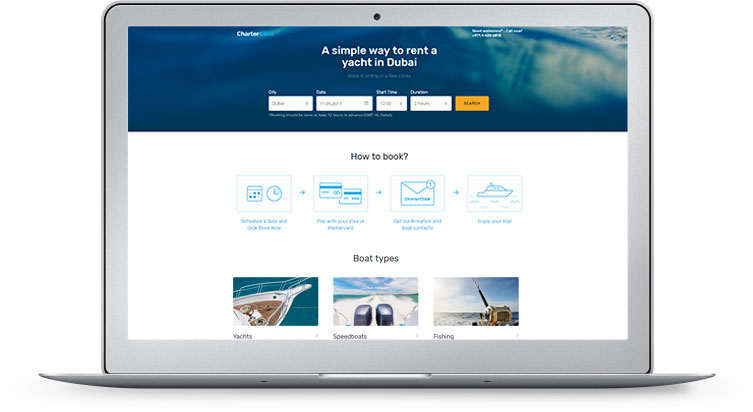 Charterclick is the UAE’s most convenient yacht rental company. With booking yachts in just a few clicks, arranging your day out at sea has never been easier. Charterclick offer speedboats, yachts and fishing trips all under one site. Simply select the date you want, view the boats available and pay through the website. The company began only in November 2016 and are now looking to expand all over the UAE.

Charterclick first approached Eminence in December 2016 wanting advice on their social media strategy. They found that their main challenge was targeting the right people. Being a very small start-up, Charterclick had extensive ideas; but with limited resources. This was where Eminence came in. They were wanting to begin with Social Media to first increase their presence online as the company was very new and needed to promote the services online.

Their main objective was to generate sales through social media and to grow their social presence online. Charterclick wanted to target a wide range of both locals, tourists and expats from around the world, starting with Dubai expats. This was a challenging task that needed a strategy for their social channels.

Eminence began this strategy by looking at the behaviour of the target market and the direct competitors. Yacht rental is a highly competitive business in UAE, especially Dubai and prices and convenient often produce the best results. However, none of these companies had an easy to sue website, that allows yachts to be instantly booked without calling the company itself.

We found that the target would be interested in different types of charters and a content plan would need to be put in place in order to produce results from the right target audience. Charterclick used Eminence to provide them with a comprehensive social media strategy for their marketing team to follow.

Eminence focused our efforts on the timings, days and several types of campaigns to generate engagement from new and existing followers to both Facebook and Instagram.

The campaign produced great results on social media, with followers from the target countries and saw 75% increase in followers in Facebook and 85% for Instagram with a 360% growth in profile views. Charterclick are self-managing very active social media accounts which generate clicks to the website. Charterclick will continue their campaign with Eminence later in the year.

Do you have digital objectives to achieve? We love challenges! Request a quotation, meeting or advice on your business to agence@eminence.ch or complete the form below.