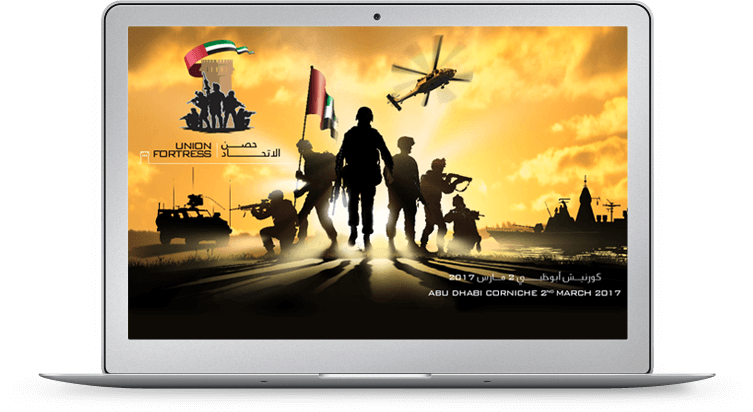 The UAE Presidential Guard is a military unit that operates outside the conventional framework of traditional armed forces like ground, marine and air forces. Formally established between 2010-2011, the Presidential Guard has been created from several UAE Armed Forces units brought together under one command, which operates on land, sea and air.

Generate the right content for locals and expats to attend

Starting from the 19th December 2016 Presidential Guard approached Eminence in order to manage their digital platforms to advertise an event that was taking place in Abu Dhabi on 2nd March called Union Fortress.

They were wanting to use digital marketing techniques in order to attract 20,000 + attendees on the day through using a range of channels; Facebook, Youtube, Instagram and Google.

This was a task that must be completed with great precision and that we needed to build an effective strategy in order to bring people to the event on the day. We were given only 20 days prior to the event to promote the Presidential Guard’s event for Google Search and only 7 days of advertising on social media.

We began by analysing the market and behaviour of the target. We recognised that government events were to be ran with great difficulty and high security, which resulted in our efforts being thoroughly analysed and checked before putting a strategy together.

We started by looking at the government’s presence online, which gave us a clear idea as to the types of messaging and identity that must be approved by the government in order to go ahead with the campaign. It is because of this long approval process, that Eminence had to be extremely organised in generating ideas and content on time.

After looking into the behaviour of the market, we found that there were keywords that could be typed into google and on social channels that had specific interests in government activity. We generated a list of over 150 key search terms in both Arabic and English that would show the event on Google Search if these words were typed in. The more specific we were with the keywords, the lower the CPC (Cost per Click) would be. Focusing our keyword strategy on generic keywords would lead to high costs for small reward.

With only 20 days for the Google Search to attract attendees and maintain interest in the event, these keywords quickly brought results and the website soon started receiving clicks. However, we managed to protect our positioning and kept a competitive advantage on these keywords compared to other events that were being promoted during March.

Facebook, Instagram and YouTube only had 7 days to produce results due to the nature of the Presidential Guard campaign. However, the website shows incredible results which led to Eminence over achieving our objective in the first 2 days.

The event, Union Fortress, took place on 2nd March and had over 20,000 people from all over the UAE attend on the day. The results were fantastic and Eminence will continue to work with Presidential Guard on numerous events throughout the UAE.

« I worked with Eminence team for my event marketing campaign, Union Fortress, the UAE’s first and only military public display which took place in Abu Dhabi on 2nd March 2017.
They provided professional digital marketing solutions for our event and really helped us to promote it on various online platforms such as Google, Facebook, Instagram ad YouTube.
The post event report showed exceptional results and by having an intelligent set up of the digital and social media advertisements, they managed to exceed the overall clicks initially predicted by 150%.
I am very happy to recommend Eminence Agency to any company, business or event in UAE or in the region »

Do you have digital objectives to achieve? We love challenges! Request a quotation, meeting or advice on your business to agence@eminence.ch or complete the form below.